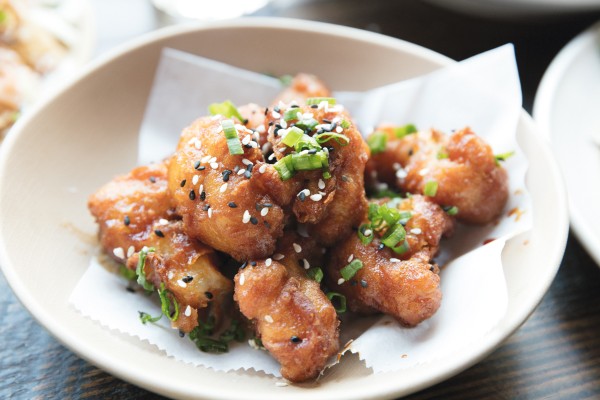 The cauliflower craze has taken over the world, and Birmingham’s food scene is on top of it. You might see the cruciferous vegetable used as a substitute for rice, pizza dough, and even burger buns, but cauliflower also is wonderful highlighted in all its floret glory. Several local restaurants have caught on and found ways to turn the veggie into an appealing appetizer, side dish, or entree. Here are seven options that will make you rethink cauliflower.

Gobhi Mattar Masala and Gobhi Pakora at Taj India
Cauliflower has long been a staple in Indian cuisine as a replacement for meat. Since many Indians are vegetarians, they use plenty of substantial vegetables that make for a filling dish. At Taj India, an entree of Gobhi (cauliflower) Mattar Masala features cauliflower and peas mixed with a flavorful spiced sauce. You can also snack on Gobhi Pakora–a street food dish of crispy fried cauliflower in a spicy batter. Served with green chutney and tamarind sauce, the appetizer provides several levels of flavor.
2226 Highland Avenue | 205.939.3805 | tajindia.net

Buffalo Cauliflower Bites at Iron City Grill
These large florets tossed in spicy buffalo sauce are seriously addictive. They offer everything you love about buffalo chicken wings, just without the meat (vegetarians rejoice!). And trust us, you won’t miss the chicken. The cauliflower is tossed with blue cheese crumbles and served with spun carrots and shaved celery, as well as a side of creamy buttermilk garlic dressing. Bonus: the dish also is gluten-free!
2208 6th Avenue South | 205.202.5483 | ironcitybham.com/the-grill

Crispy Kung Pao Cauliflower at Avondale Common House
Have a craving for Chinese takeout food but don’t want the added MSG bomb? Avondale Common House’s Crispy Kung Pao Cauliflower is the perfect solution. The cauliflower is breaded and fried, tossed in a sweet and spicy sauce, then topped with crushed cashews and scallions. It’s the best snack to nosh on while listening to live music at the restaurant every Tuesday night.
4100 3rd Avenue South | 205.703.9895 | avondalecommonhouse.com

Roasted Cauliflower at Sky Castle
Sky Castle celebrates cauliflower in its simplicity by giving it a good roast–and not much else. Roasting brings cauliflower’s natural flavors without overwhelming it in sauces. Since the restaurant is owned by the Bajalieh brothers, they bring in a little bit of their Mediterranean heritage by serving their cauliflower with a tahini vinaigrette. Lemon and capers add a bit of acidity and salt to round out the dish.
2808 7th Avenue South | 205.578.6080 | skycastlebham.com

Korean Fried Cauliflower at East West
The new Asian-fusion joint on Second Avenue North downtown has already become a favorite for those looking for a flavorful culinary experience. The restaurant’s large selection of small plates includes the Korean Fried Cauliflower–a dish they debuted in several pop-ups before opening the restaurant. The florets are breaded in a tempura batter, fried until crisp, and tossed in an umami-packed garlic-ginger sauce.
2306 2nd Avenue North | 205.202.4496 | eastwestbirmingham.com

Cauliflower Taco at Bartaco
Cauliflower in a taco? You bet. The latest taco joint in Edgewood brings California-fresh Mexican cuisine to the city. One of the most unique is the cauliflower taco. Serving as a substitute for meat, it’s a good option for vegetarians who still want to enjoy a taco (along with the Portobello and falafel taco dishes). A romesco sauce tops the cauliflower taco, which can be served in a corn tortilla or lettuce wrapped for the carb-conscious.
1017 Oxmoor Road | 205.875.8226 | bartaco.com

Bang Bang Cauliflower at Vino
In case you haven’t figured it out by now, cauliflower pairs well with spicy sauces because the hearty vegetable holds up well to richer flavors. Vino has their own spicy version, made with a sweet red chili sauce. Scallions and roasted sesame seeds add to the popular appetizer’s Asian flair. Try it on “Merry Monday,” Vino’s weekly Monday happy hour, where the dish is only $5.
1930 Cahaba Road | 205.870.8404 | vinobirmingham.com