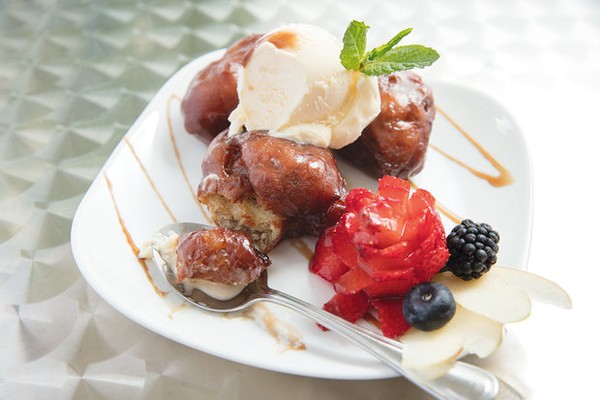 A couple sits under a tree swathed in soft-white lights on the patio at Vino restaurant in English Village. Summer is waning but the still-warm night air carries a hint of fall.

Open since 2011, Vino is known for Mediterranean-style cuisine spanning from Morocco to Italy and on to the Middle East. But one of its best-loved desserts is as all-American as apple pie.

Vino Apple Fritters A La Mode is as simple as three balls of fried apple-flecked batter, served with a generous scoop of vanilla ice cream on top of sweet apple slices. Cinnamon sauce tops the dessert. When time allows, the kitchen scripts the word “Vino” on the plate in chocolate.

Owner Al Rabiee has served apple fritters in some form since he owned the Southside restaurant, Anthony’s, in the 1980s. “We used to make them bigger but over the years we started making them smaller,” Rabiee says. “People are watching their weight.”

Customers have long associated the restaurateur with fritters. Rabiee says that when his daughter was born, people at the hospital would point out his family and tell each other, “Those are the fritter people.”

Timing is the key to Vino’s fritters, Rabiee says. The dough needs several hours to properly rise before it’s formed into balls and deep-fried in non-GMO rice bran oil.

Rabiee has built a strong fan base over the years. After selling Anthony’s, he ran other Southside restaurants and sold real estate for a few years before opening Vino.

The California contemporary-style building includes an art gallery, Gallery 1930, which is separately owned. In 2015, Rabiee opened the Gallery Bar inside the space, which specializes in cocktails, oysters, and other seafood appetizers.

Windows showcase the gallery, even when it is closed. “People love to walk around and see the artwork,” Rabiee says.

The patio at Vino, with nearly two dozen tables, almost doubles the inside seating capacity. It is one of the city’s most inviting places to dine al fresco.

The elevated patio is set back and mostly shielded from traffic on Cahaba Road. Most of the outside tables are under a cover. During dry weather, tables are set up under the patio’s four trees, which are strung with lights, providing a peaceful setting to enjoy a leisurely meal or a sweet treat.